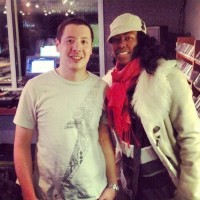 This week we started it off with some dance and disco before dropping things down into some hip hop. I’m really loving the latest album Chrome Waves from Kraak and Smaak. Lots of tastiness to be had on that one. Had to drop a bit of Digital Underground since I’ve had a couple of conversations recently about how they’re totally slept on.

Towards the end of the show, Nicole from Mpact Dance dropped by to talk about their plans to create an arts center for at risk youth called The Lab. The project’s been selected as a semi-finalist in a competition for grant money from Aviva and the group hope to reach out to the hip hop community and beyond to garner votes for the project. Voting is super easy for Facebook types, and the voting period runs Dec. 2nd to December 11th. Those interested in supporting the project should visit their facebook page, vote4thelab.com or the Aviva page itself.