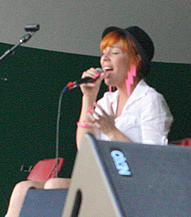 This week, the lovely Esthero (blog, label site, twitter, myspace) along with her travelling companion Oboe dropped by to talk about what’s been going on in her life ahead of her appearance at this year’s Calgary Folk Festival. Well, Oboe didn’t do much talking, actually.

I absolutely loved her debut Breath From Another (as did many, it seems, who were present at her folk fest show), but wasn’t as hot on Original Bitch and consequently totally slept on 2006’s Wikked Lil’ Grrrls. My bad. Listening to it ahead of this show straightened me out pretty good. More recently Esthero’s been keeping busy recording songs for her new album, as well as collaboration with Kanye West and Brandy among others, just in case you missed those.

Esthero was a pleasure to talk to, despite the teasing near the end. The next day’s show at the Folk Fest was a lot of fun as well, with the acoustic arrangements really highlighting her voice. Sadly, the group dynamic didn’t quite gel all that well during the workshop on Saturday with Emily Wells, Chad Van Gaalen and Kid Koala. Luckily, if you were at the Folk Fest, there were a heck of a lot of other interesting things going on during the weekend (including Kid Koala’s killer solo set late Saturday afternoon).

Mostly hip hop this week as we feature some upcoming shows and keep paying our respects to mj.

No large intro this time, just the show… hip hop, and stuff. 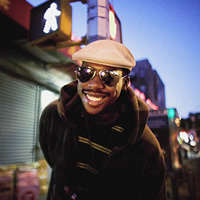 Seems sort of fitting that while I made small get-yer-drink-on set in this show in semi-honour to the much-loathed and loved Stampede, last night, I had my own mini anti-stampede club crawl going on, with major stops at the Keys’n’Krates show at the mercury and the Flying Lotus show at the Hifi. Flying Lotus (who I’ve played on the show many times previously and written about in beatroute) totally wrecked shop. It was eye-opening to see so many cats coming out to what was essentially a glitch-hop (for lack of a better term) show. I didn’t know Calgary was ready. I do now, though. Dude was clearly enjoying himself as well, grinning like the Cheshire Cat for most of the show. It’s also nice to see Calgary getting a bit of a rep as a good city for audiences vs our rep from 5-6yrs ago.

Anyways, back to the radio show: a mixed back; downtempo, d’n’b, soul & funk, and some hip hop at the end.