Seeing as the Yeah What She Said folks were interviewing Brenda from the Calgary International Film Fest, I thought I’d start it off with one of the finest movie soundtracks of the 70s, Superfly. After T-Connection’s Groove to Get Down, I figured I’d play a bit of DJ Jazzy Jeff and The Fresh Prince. The title track to He’s the DJ, I’m The Rapper samples the T-Connection break, so there’s the connection. I actually meant to play that track, but ended up playing Live at Union Square because I got the songs mixed up. People clown a lot on on The Artist Formerly Known as The Fresh Prince, but say what you will, dude could rhyme. Sure, many of the singles off of their 1998 release were aimed squarely at the pop charts, but Will Smith lets loose some pretty good battle rhymes on the title track without even having to resort to cheap slurs or swearing.

The CD version of the song ends around the 5minute mark, but the LP and cassette versions run for another minute and half while Jeff rocks the T-Connection beat a little longer. That tape was in heavy rotation in my walkman. 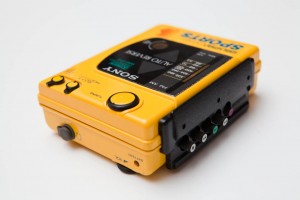 This was my shiznit

I could barely keep up with the MC as I rapped along. And all the while Jeff’s cutting up a storm on the beat in the background. He does the same on Live at Union Square. A true measure of Jeff’s abilities on the 1s and 2s are how well those scratches withstand the test of time (as compared with say, Eric B’s scratches at the end of I Know You Got Soul, from about the same time). Really, that should come as no surprise seeing as Jeff won the 1986 NMS DJ Battle and co-invented the transform scratch . He’s the DJ, I’m The Rapper is basically one of the reasons I started DJ’ing.

Anyways, after that, I rocked a bit of Maestro Fresh Wes (who was no slouch on the mic either) and the aforementioned Big Daddy Kane. After that, what else? more hip hop and funk. I’ve recently rediscovered Nas’ 1996 sophomore effort, It Was Written. So after playing the Main Source track which was his intro to the world, I dropped an early demo and then a handful of tracks off of It Was Written. I rocked Nas debut Illmatic ’til I wore out the tape, so after that his sophomore effort would be able to live up to my expectations for his follow-up. It’s not that I didn’t like the album at the time, I just didn’t L.O.V.E. it like I did his debut. I’ve been rocking it a bit more of late and have really been enjoying re-discovering it.

Anyways, ’nuff yappin’, here it is: