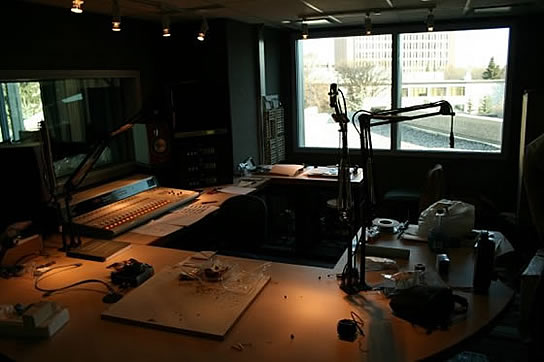 Well, we finally made it into our new studio space. It’s only two floors up, but it’s a world of difference! Huge thanks to our Station Manager, the inimitable Chad Saunders, without whom I doubt this could have been accomplished. Of course, this is also due in no small part to the generous support of our listeners, so give yourselves a hand as well.

Anyways, I’m definitely taking more than a minute to get used to the new digs. The board is laid out backwards from the old one downstairs, and the DJ tables are a few steps from the mixing console (Not pictured above, but they’re below the window at right), so it’s a bit trickier to segue from the turntables to other media. But other than those minor complaints, this new space kicks serious ass.

This week on the show, we were spotlighting drum’n’bass and dubsteb ahead of the Blu Mar Ten and Rusko shows which happened on the 21st. I didn’t hear about the Blu Mar Ten show, but apparently the Rusko show was bananas. If I could’ve been in 3 places at once, I would definitely have checked out both shows while holding down my regular Saturday residency. Good thing I’m having so much fun at The Spread, or else I might feel like I’m really missing out.

A nice mix of funk breaks and hip hop.

In your area Friday with DJ Disoriental!

Hey, just a quick note for those interested that I’ll be playing tonight down at Habitat with DJ Disoriental for his Friday Night Work Out Plan!. This guy’s cuts are so sick, it should be a killer night with us busting out a 2×4 night to remember. Hope you can make it.

This week turned out pretty good, despite some ill-advised pitchy tricks. Starting out this evening with some really mellow hip hop before winding it up right at the end with some house music for the last 15 minutes or so. Ah, those house tracks brings back the good old days of Sole Sessions at the Night Gallery with my homeboy Shidoshi. Nearly brings a tear to my eye! I’m gonna have to start playing more house after this. Seriously, 2-minute blends with dead easy intros and outros?! I’ve missed you! I haven’t ridden mixes that long in forever…